The Athens-Clarke County Leisure Services Department will present the first exhibition of the Ossabaw Artists Collective. Ossabaw Island: Holy Ground, opens on Sunday, May 19 at the Lyndon House Art Center at 293 Hoyt Street in Athens, Georgia from 2:00-4:00 pm.

The Ossabaw Artists Collective is a group of artists (painters and photographers) who have explored Ossabaw Island State Heritage Preserve twice a year, since 2009, as part of the Ossabaw Island Foundation's Visiting Artists Program. The artists include: June Ball, Barbara Breen, Paula Eubanks, Paul Hill, Jan Kapoor, Sandy King, Betty Oliver, Russ Regnery, Jane Springfield, Larry Street, Sam Wang, Angela Willie and Stant Willie. The group includes professional artists who have devoted their lives to their craft as well as college professors in a variety of fields include modern languages, art education, photography and technical communications. The group also includes members who have worked as both artists and other professions including a CDC researcher, an attorney and a commercial printer. 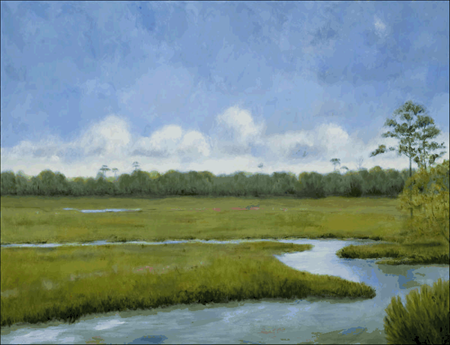 Ossabaw Island is one of Georgia's largest barrier islands and is an enthralling mix subtropical island habitats that include fresh water marshes (complete with extra, extra large alligators), salt water marshes, maritime oak forests, and pristine beaches. Overlaid on to this fabric of island habitats are occasional, but sometimes unmistakable, traces of past human endeavors including Native American, 18th and 19th century Antebellum, and early 20th century gilded era. The island's current status is as a cultural and environmental resource accessible by boat to artists, historians, and environmental scientists for the purposes of education and research. Typically they are the only humans on the island in addition to 2-3 GA DNR employees, a representative from the Ossabaw Island Foundation, and Ms. Sandy West, the 100 year old whose family owned the entire island until recently and who has been central to shaping the current and future status of the island. The Ossabaw Artists Collective is very much in the spirit of artistic experimentation that has been a hallmark of Ms. West's vision for the island for the past 50-60 years.

The island is often beautiful, mysterious in many ways, and tinged with a feeling of potential new adventure, and new visual possibilities, that can arise at any time. The name for the exhibit was inspired by an old Woody Guthrie song that speaks to the awe and reverence we have for this place. The group is small enough to sit together around a long table for dinners, which of course they cook for themselves, and discuss their work and ideas. They learn a lot from each other much like the 19th century artistic salons of Paris. They sleep in a 100 year-old bunkhouse on recycled UGA dorm room bunk beds and are usually up at dawn to catch the morning light.

Their first exhibition opens on Sunday, May 19 at the Lyndon House Arts Center in Athens. The diversity of exhibition material spans a broad range including but not limited to large (as large as 5”x7”) format photography, digital photography, pinhole photography, watercolor, acrylic and oil painting as well as mixed media.