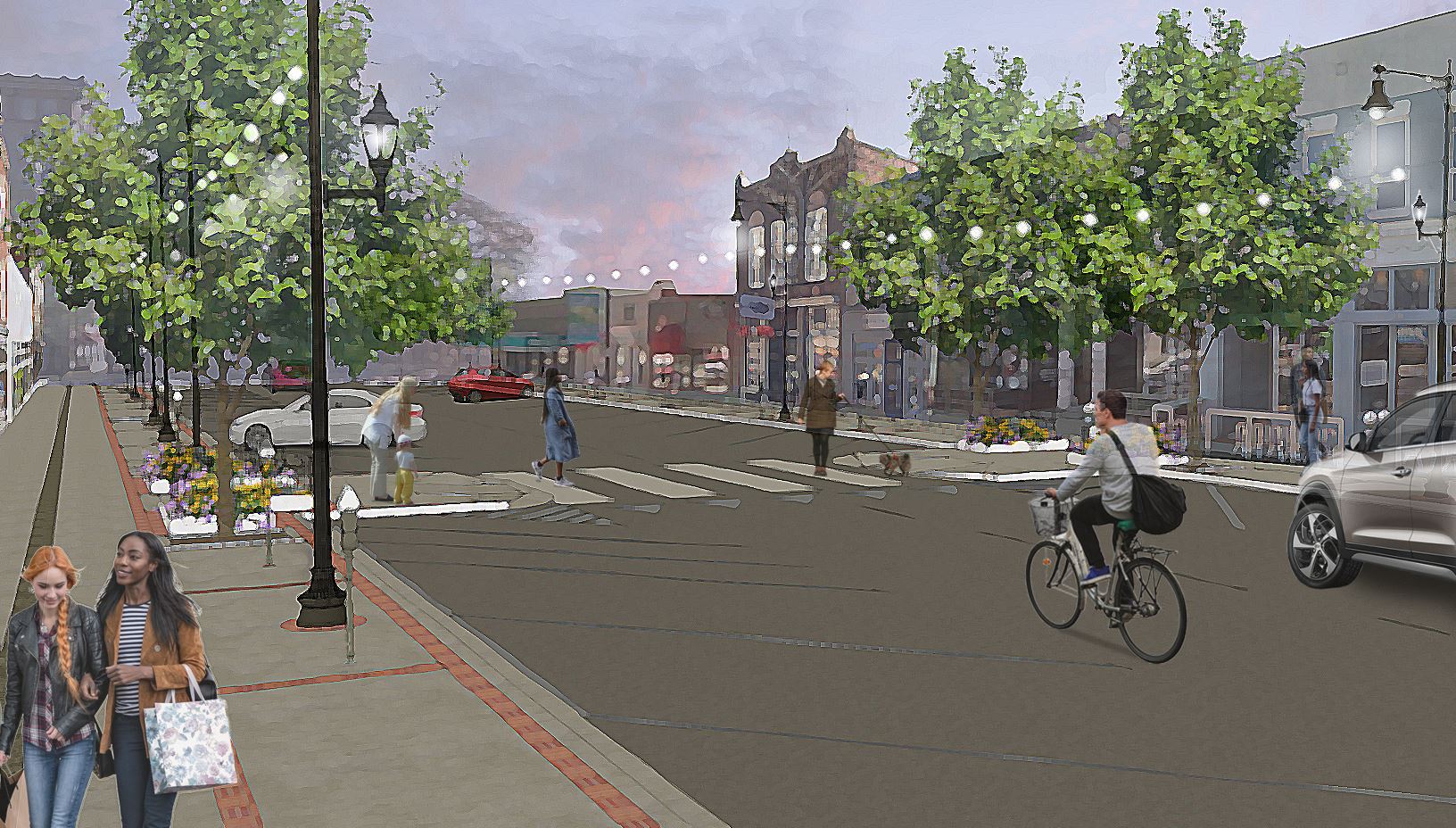 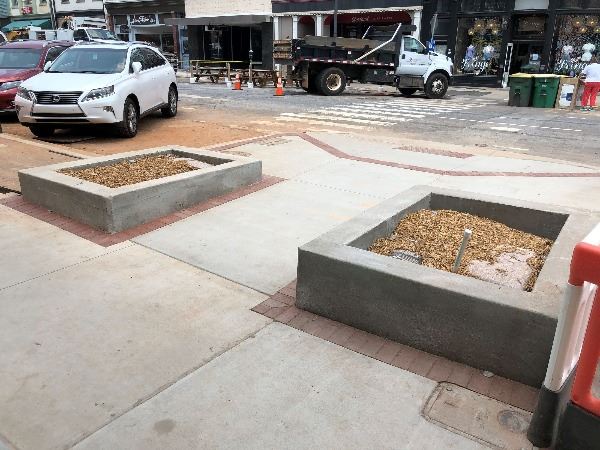 Work on the East Clayton Street Improvements Project continues with the installation of new electrical conduit duct banks in the corridor and streetscape work. The conduits will be used for electrical wiring for street lighting, fiber optic cabling, traffic and pedestrian signals, and other data and electrical needs. 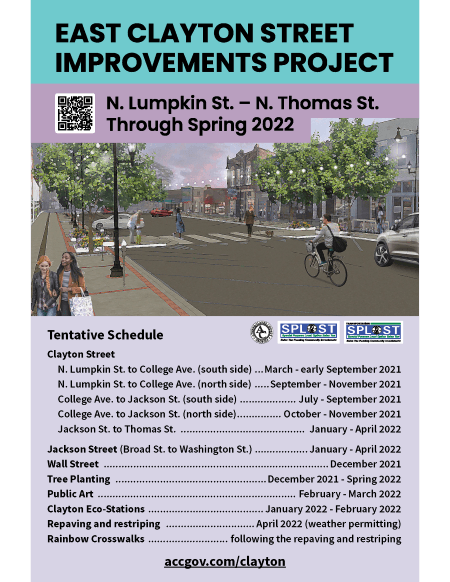 Due to a variety of factors, the tentative schedule has shifted slightly as noted below. (Letter-sized PDF flyer of the timeline available online)

The initial work will involve the demolition of existing streetscape and the replacement to 75-80% of completion. Final completion to 100% - landscaping and paving - will be done towards the end of the project in larger segments along the entire corridor.Sidewalks will be kept open as much as possible. Businesses remain open during the construction and access will be provided to their entrances except for possible brief closures that will be arranged with each business. 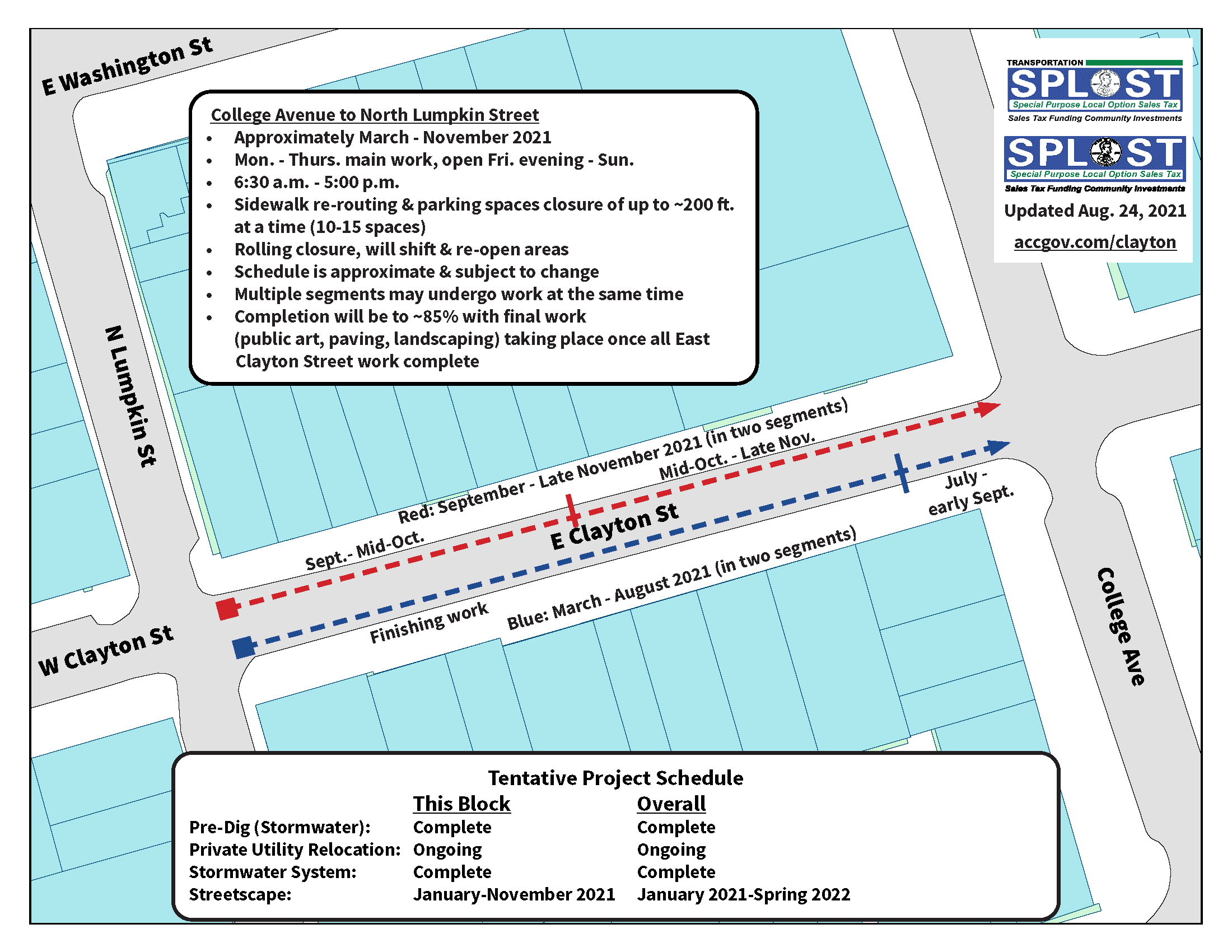 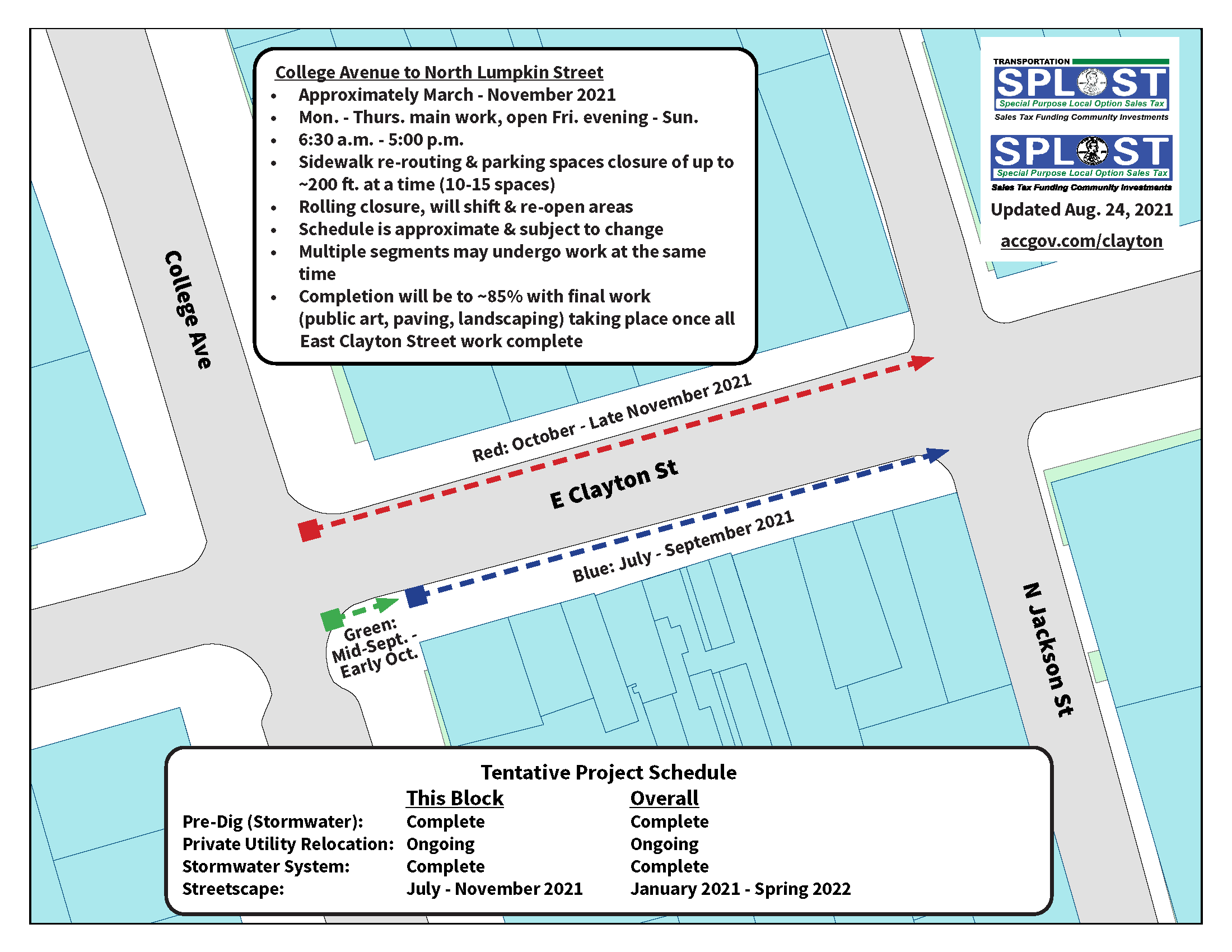 More trees will be replanted in the area than were removed.

Tree replacement has been a part of the East Clayton Street Improvements Project since the beginning of the project. Many of the former trees were not designed for an urban environment and were not suited for confined spaces. The planters that encase them and the soil used is not as well-designed for this kind of environment as are the currently-designed planters and soil.

New trees better suited to an urban environment will be planted in spaces that are better designed to handle their root systems. These new trees should last for decades, if not longer, without causing the problems of these older ones.

The artist for Clayton Street Improvements Public Art, Eric Leshinsky, is working on his fabrication drawings

The right-of-way for East Clayton Street varies between buildings from 82 feet to 95 feet in this area. The drive lanes are not centered, nor are they parallel to the buildings, making the amount of space available for cafes different between adjacent buildings and between opposite sides of the street. The tightest of spots have less than two feet of space available for sidewalk cafés.

As a result of approved changes and some recent sidewalk café ordinance changes, sidewalk cafés in the smaller areas will be at least 36” wide on East Clayton Street, while also creating larger areas for pedestrian travel.

The International Building Code adopted by Georgia in January 2020 does not allow catenary / festoon lighting to cross over the street based on the building conditions downtown. The overarching concern is safety as emergency response vehicles could potentially become entangled in the wiring and rendered inoperable; thus potentially hampering rescue and fire fighting operations.

The streetscape plans use low-voltage festoon lighting, which can be hung from pole to pole, parallel to the sidewalk and trees. This option will allow additional lighting down the sidewalks until the trees reach a large enough size to allow the lighting to be added to the trees.

A water quality treatment unit will remove trash, oil, and sediment near the downstream outfall in conjunction with the existing underground facility located on East Broad Street at the Firefly Trail entrance. This approach will allow pressure washing of the streetscape once the project is completed.

In June 2020, the Mayor and Commission approved the installation of a rainbow crosswalk in support of the LGBTQIA+ community. It was funded as part of TSPLOST 2018 at the June 25, 2020 Mayor and Commission meeting with other pedestrian improvements in the College Avenue and East Broad Street area.

A public survey related to the installation of a public restroom on College Avenue near the intersection with East Washington Street outside the parking deck ended on June 15. Although this facility is not technically part of this project (it is outside the boundaries), discussion is taking place during the work.

A presentation on the findings, recommendations, and next steps will take place at the Mayor and Commission's Work Session on Tuesday, September 14 at 5:30 PM (updated).

At the April 6, 2021 Regular Session, the Mayor and Commission approved the revised designs and layouts for eco-stations to hold garbage and recycling materials. Solid Waste is working with their designer to finalize the fabrication details of the eco-stations. Although not technically a part of the streetscape project as they will be in areas other than East Clayton Street, they are being installed while the work is in progress.

Eco-stations are enclosed areas used to gather trash and recycling from businesses and residents in order to avoid bags and recycling being placed directly on the streetscape / sidewalk. Bags left on the curbs leak, are unsightly, cause pedestrian conflicts, and can be a safety hazard.

A call for art will take place for the wrapping of the eco-stations once the design details are completed and fabrication begins.

Schedule is tentative and subject to change. It is highly dependent on weather and underground factors. More detailed information will be provided in block by block and section by section areas as those areas come closer to construction work.

East Clayton Street from North Lumpkin Street to North Thomas Street transitioned to the approved two lane configuration in the summer of 2020.

The two lane configuration has already been in place on the remainder of Clayton Street for a number of years.

The center lanes are no longer available for parking for deliveries, vendors, and businesses. However, a series of new and existing side street and adjacent block delivery areas are available for use.

The angles and depth of the parking spaces will change as the curbing is adjusted to the new width. Final paving and striping of the project area will take place towards the completion of the full project, which is expected in spring 2022.

The streetscape preliminary design was approved for the Clayton Street Improvements Project by the Mayor and Commission at their February 5, 2019 meeting.

Watch an virtual presentation of the public art project by artist Eric Leshinsky from January 2021.

The Mayor and Commission also approved the Athens Cultural Affairs Commission's recommendation for the preliminary concept of the public art component for East Clayton Street on March 5, 2019.

Selected artist Eric Leshinsky, an urban planner, will work to finalize his Clayton Connector public art with staff and the community over the coming months, as the art installation will not occur until towards the end of the project.

The Clayton Connector uses a powder-coated galvanized metal pipe that bends in multiple ways, stops and starts, and creates functional shapes such as benches, bike racks, and other frames, as it moves along the sidewalk within a narrow area that avoids disrupting pedestrian traffic.

Note that schedules referenced on these documents have changed.

The Athens-Clarke County Mayor and Commission approved the Clayton Street area project concept at their Regular Voting Session on Tuesday, January 2, 2018 and the preliminary design at their Regular Voting Session on Tuesday, June 5, 2018 for Clayton Street from Thomas Street to North Lumpkin Street. Wall Street and North Jackson Street from East Broad Street to Washington Street are considered part of the overall project that will be considered during the design planning.

At this meeting, the Mayor & Commission:

Phase 1 of the project was completed in 2014 by the ACC Public Utilities Department and included improving water and sewer infrastructure in this area downtown.

Phase 2 of the project is designed to install and improve stormwater facilities and other infrastructure, as well as the streetscape on the East Clayton Street area between Thomas Street and Lumpkin Street.

Phase 2 project work will include:

Originally funded through Special Purpose Local Option Sales Tax (SPLOST) funds, the project originally included improvements to the area around City Hall. Phase 2 was put on hold in fall 2015 due to the sole project bid coming in at nearly twice the budgeted amount for the project after the previous bid opportunity received no responses in 2014.

Since 2015, plans were changed to reduce costs by eliminating the City Hall area of the project, leaving only the Clayton Street area, and planning for ACC Transportation and Public Works to obtain the needed equipment and crews to undertake the stormwater and other underground infrastructure internally, thus reducing the cost and risk.

On November 7, 2017, voters in Athens-Clarke County approved the Transportation Special Purpose Local Option Sales Tax (TSPLOST) program. One of the projects in this program added funding to the original SPLOST funds for the Clayton Street area project, which has enabled the project to move forward in early 2018 into the planning stage and, beginning on June 18, 2018, the construction stage.