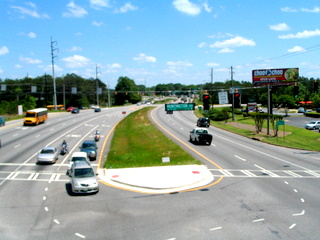 The Traffic Studies Section conducts traffic studies and investigations to improve safety and traffic circulation for the motoring public. Various types of traffic data are collected and analyzed in the performance of these studies, which include turning movement counts, traffic volume counts, delay studies, speed studies and accident history and analyses. This information is primarily used to determine traffic control methods and signal timing.

Our department is constantly working to study, evaluate and improve all of our traffic signal systems. Every traffic signal included in a system requires regular maintenance. Even the coordinated plans require regular adjustment due to the fluctuation in traffic demands throughout the season.

Section 2B.07 Stop and Multi-Way Factors for Justification

Signals that are in a coordinated mode are confined to a cycle length, which is governed by the cycle of a nearby major intersection. All signals along an arterial must have a common cycle length in order to achieve progression. Within that cycle length, a block of time is allocated to each movement. Each movement can appear only at a certain point in the cycle; once that has occurred, the movement cannot appear again until the next cycle. If a movement does not need all of its allocated time, the unused time becomes available to the next movement; this continues until all of the unused time, if any remains, ultimately is inherited by the main street movement where the cycle “zeros” itself out or begins again. Cycle lengths vary depending on the time of day. During the AM and PM rush hours, signals have their longest cycle lengths because the major roads must accommodate the greatest amount of traffic. In the midday the cycle lengths are slightly shorter and the shortest cycles typically occur at night and on weekends.