The first ten inductees were selected by a local resident committee appointed by Athens-Clarke County Mayor Kelly Girtz. During the selection process, committee members considered the contribution to the identity of Athens, established career, diverse representation in cultural and racial identity, distinct musical style, and historical context. Additional artists will be selected for induction to the Athens Music Walk of Fame in the coming years.

The plaque design is inspired by both a guitar pick and a location pin to illustrate the link between the medium and the place it was created. The Athens-Clarke County Transportation and Public Works Department’s Streets and Drainage Division installed all ten of the plaques in September 2020, completing this Sub-Project. The honorees includes the B-52's, Danger Mouse (Brian Joseph Burton), Drive-By Truckers, the Elephant 6 Recording Company, Hall Johnson, Neal Pattman, Pylon, R.E.M., Vic Chesnutt, and Widespread Panic.

Read all about the Athens Music Walk of Fame along with location map! 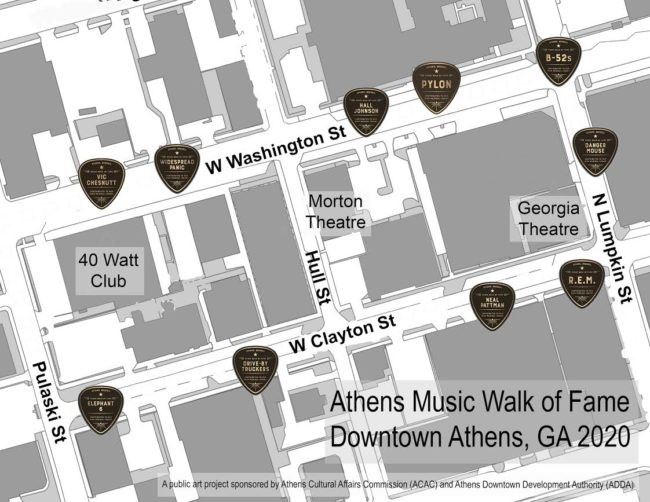