Louie R. Bridges Log House As families moved to different areas seeking a better life, they also brought distinct cultural heritages and different adaptations to their environment. Shelter from the weather, wild animals, and other elements was critical to the survival of the family. Because trees were plentiful, a log structure created a simple and practical shelter.

The first structure traditionally built at a new homestead site in the Southeast was a log cabin. Log cabins were built quickly, with significantly less attention to construction detail and, generally, a dirt floor and a clay over log chimney. Homes that were intended to be more permanent were called a log house. Log houses were carefully structured, with hand-hewn logs, wooden floors, and brick or stone chimneys. 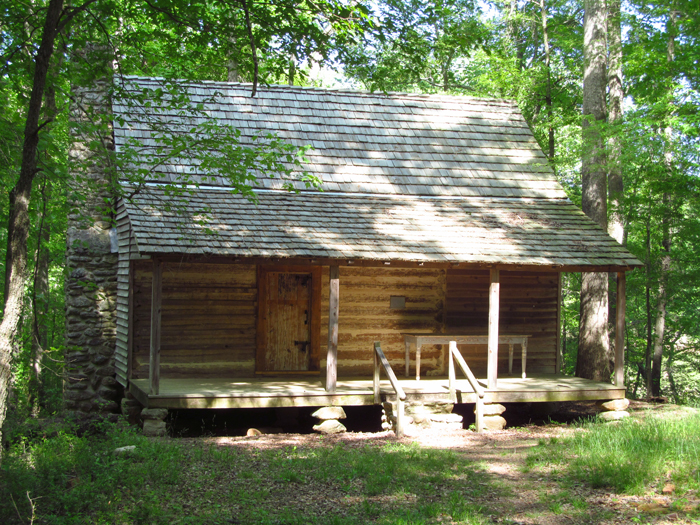 A snug, reasonably tight log house was the objective and locking the logs securely together required considerable attention. Logs were carefully selected and used either round or after being hand-hewn for a more secure fit. Carefully crafted notches were cut at the corner of each log thus reducing or eliminating the need for nails. At this point in history nails were hand wrought from iron, expensive to purchase in large quantities, and, because of their weight, difficult to transport via wagon to the construction site. Structure was weather-proofed by stuffing high-quality clay in between the logs and other cracks. The process of packing clay into the cracks of a log structure is called "chinking". Careful examination of the Bridges Log House illustrates the extensive chinking, intricate notching and the hand-hewn log construction techniques used to build log structures.

The Louie R. Bridges Log House at Sandy Creek Nature Center was built by Ambrose Baber around 1805 - 1810. Mr. Baber and his family moved to Georgia from Virginia and purchased 386 acres of land from James Holt in 1805. The land was located near Mack's Creek in Oglethorpe County. Typical construction techniques typically used in Virginia area are very evident in the Bridges Log House. In 1980, the log house was donated to Sandy Creek Nature Center, Clarke County, Georgia.

The log house started out as a "single-pen" model, measuring 16 x 20 feet. These dimensions were chosen because suitable trees longer than 20 feet were difficult to locate, transport, and handle. By adding a second wood-frame or stone room onto the end of the house, the Bridges Log House became a "double-pen" style house. The addition, or second "pen" was built on the end of the house opposite the chimney. Logs were fastened using a style of notching known as diamond notching. The notches are weight bearing and hold the walls in place, preventing horizontal slippage. Diamond notching was used mainly in the Northeastern part of the United States and is rarely found in the South.

Since older log houses and cabins were made of untreated, air-dried wood, the logs would shrink as the house settled. This would make wide spaces between the logs. The open spaces were packed with either a mixture of straw and mud or clay or a mixture of clay, sand, and horse hair. This process is referred to as "chinking". In places where the gap between logs was too large, thin poles or sticks were wedged in the space prior to chinking.

The log house had a fireplace with a quarried granite chimney. The chimney was constructed with the help of the Bogg family in 1936. It is assumed that the original field stone chimney became unsafe and either fell down or was torn down. Later occupants of the log house left a hole in the roof to allow the smoke to escape.

Because of Georgia's long, hot summers, keeping cool was a major consideration. There were few windows in a log house because they weaken the structure and were time consuming to build. The Bridge's Log House has one window located to the right of the fireplace and another in the wood-frame addition. The house's two doors are positioned exactly across from each other in order to create a cool draft through the house. Additionally, the house is raised off the ground further cooling the structure by allowing air to freely circulate around the house. Raised foundation construction also helps keep the wood dry thereby reducing fungal rot and insect damage.