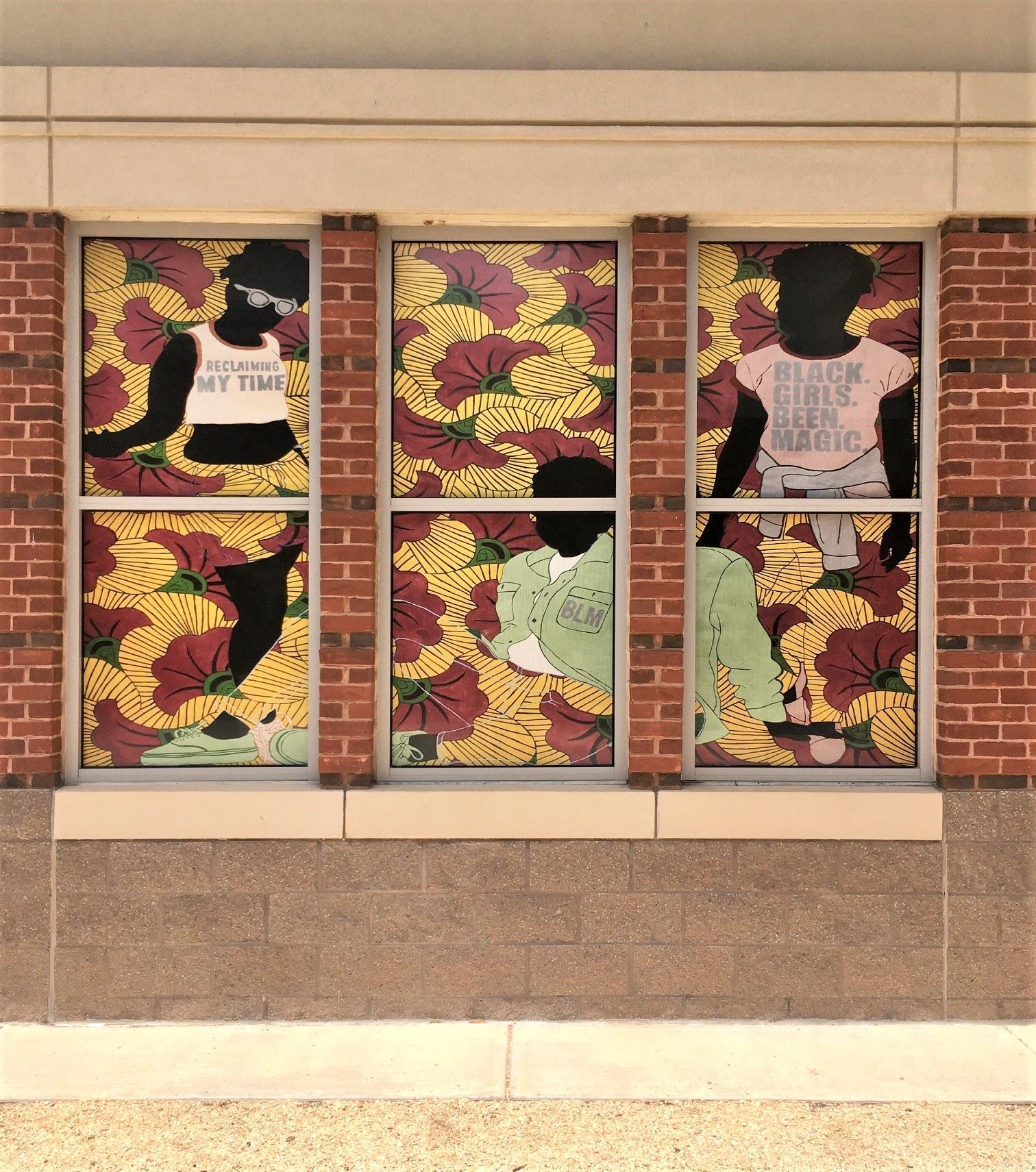 Window Works is an outdoor project located at the entrance of the Lyndon House Arts Center. Using the banks of windows as a palette, AJ Aremu represents black bodies in motion and states of repose. Their contemporary clothing blends with African patterns in Aremu’s exploration into the melding of cultures.

Window Works is a new outdoor art experience in response to the Covid pandemic, available for viewing while in daylight.

AJ Aremu is a 2nd generation immigrant artist based in the US. They use a variety of art techniques such as painting, drawing, and printmaking to express their stories or political messages.

"I aim to depict the dichotomy that exists between African-American Culture and African culture. Through this exploration, I intend to create a unity between these separate, but vital cultures. I portray young black individuals in their everyday American clothing but highlighted the lower half of their bodies with African print patterns." 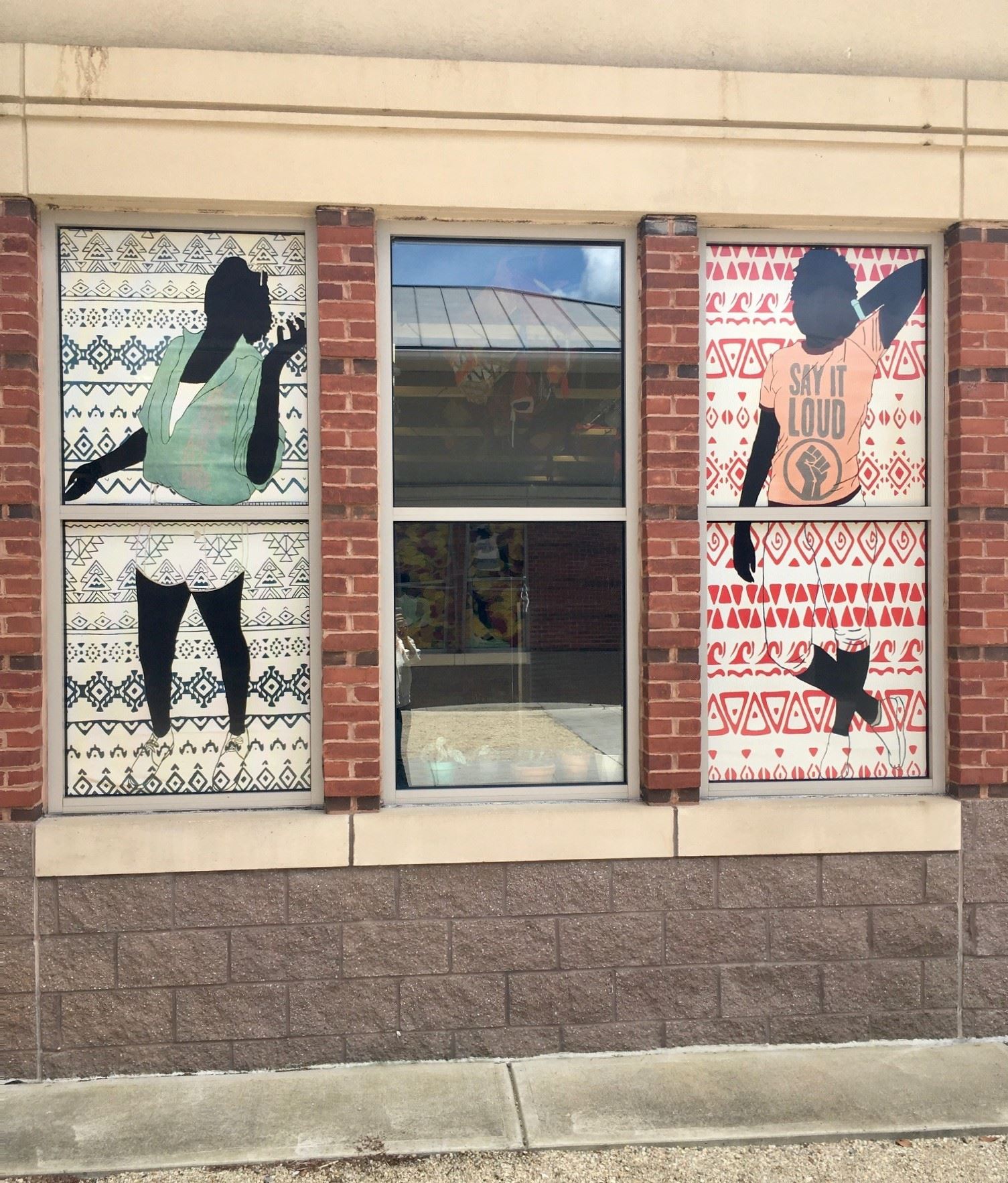 "I use the African print pattern as the background of my tapestry, illustrating the connection between Africans, and African Americans. running through them as well as in the background.

The bodies of the individuals in my work are portrayed in silhouette. I chose to use silhouettes because I wanted my audience to be able to envision themselves in the painting and black being the absences of color further drives the point home of the treatment of black people within the United States. The clothing were all items that would be typically worn by everyday people you would see on the street.

I also use the silhouettes, to represent black individuals as a whole, rather than the representation being only limited to the model used for the painting. The goal is to say that black people, as a whole race, have to ability to progress as one in a world where systematic oppression has restricted and limited our abilities as black individuals. It is when we come as one that we are able to truly advance in the world.

My paintings are large scale, varying from three feet to six feet high as well as three feet to about twelve feet wide. My large-scale paintings have been on un-stretched canvas that have been displayed using hooks, wood, or simply positioned on the ground. Creating life size figures gives me the ability to allow the viewer to not see the painting as a painting, but rather see it as themselves or another human. I am creating a connection between the viewer and my paintings speaking not only to their humanity, but also immersing them in the experience of another to their humanity." - AJ Aremu 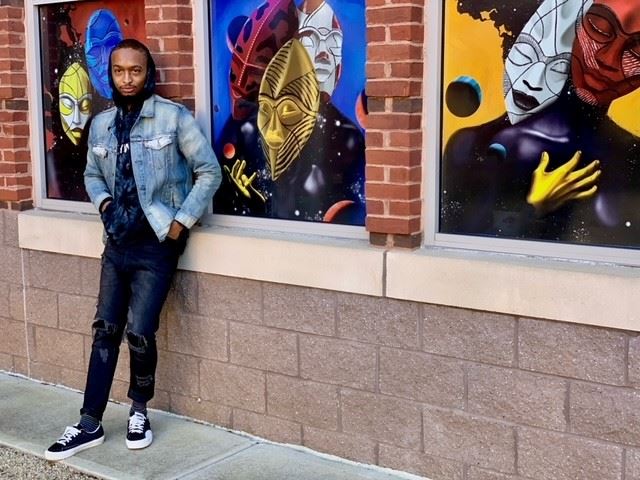 The Lyndon House Arts Center is pleased to present a new project entitled Window Works featuring original site-designed artworks by local artist Noraa James. Window Works is a new outdoor art experience in response to the Covid pandemic, available for viewing while in daylight outside.

Window Works is an outdoor project located at the entrance of the Lyndon House Arts Center.  Using the banks of windows as a palette, Noraa James has designed a triptych and diptych inspired by love, the Black body and primary colors. Noraa’s work is an exploration into the representation of blackness in its beauty, sublimity and the connectedness of such with the natural elements in and around us, primarily through the scope of afrofuturism and afrosurrealism.

Window Works (2021) comprises of a digitally painted diptych and triptych portraying a continued exploration in the sublimity of the deeply melanated being and literal resemblances between dark skin and the night sky. These figures are portrayed as ancestors of extraterrestrial origin and cosmic proportion through their relation to other celestial bodies, that they are both an authority and embodiment of. In all of my art, I’m driven to create portrayals of Black people with a divine sense of esteem, mythos and golden touch to increase the positive representations of melanin and to celebrate deeply pigmented individuals who have historically been targets of contemptuous perception.

In Love in Primary, a triptych of embracing figures, I intended to portray moments of intimacy and interconnectedness through friendship and solidarity. This togetherness is catalyzed from a personal longing to see and experience more physical touch that has become endangered due to some secondary symptoms of the COVID-19 pandemic like isolation, alienation, distrust and neurosis.

Planet Nursery is a digitally-painted diptych portraying a world creator and her black panther companion. Dark as the night sky and donning a crown of light, this matriarchal figure is posed resembling iconic figures like Lady Columbia and the Statue of Liberty. The black panther’s primary role is to use its paws to propel the worlds she manifests into orbital revolution. 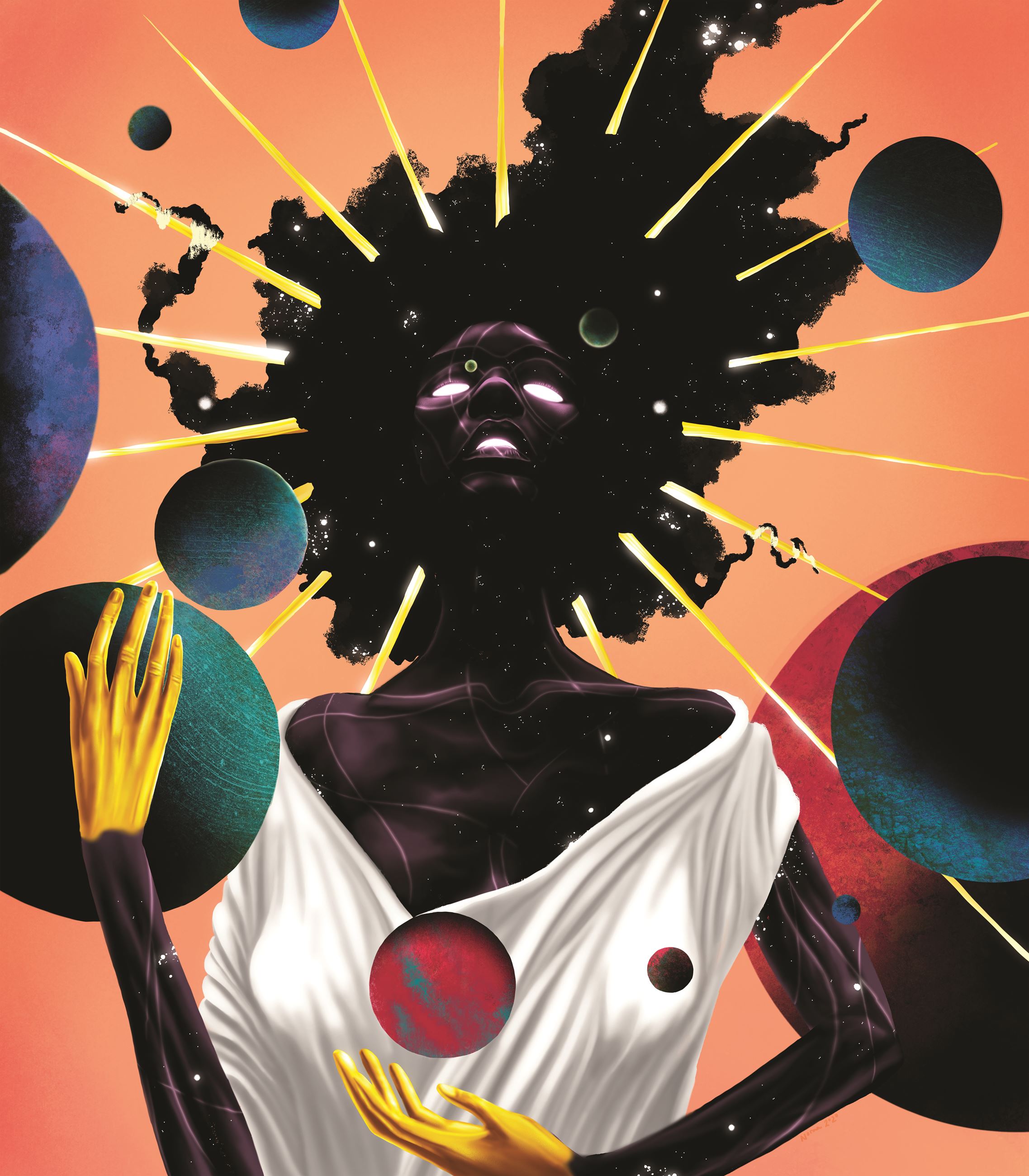 Noraa James is an artist, designer and photographer from Norfolk, Virginia, a graduate of Old Dominion University and presently based in Athens, Georgia. James is an artist listed in the athenscreatives.directory website co-hosted by Envision Athens and the ACC Department of Economic Development where his work was introduced to the Lyndon House Arts Center.