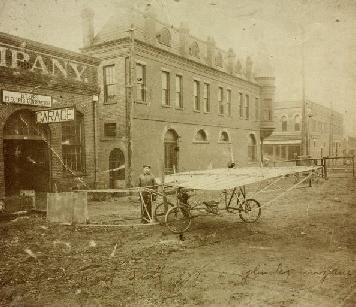 In 1904, Mr. Epps dropped out of Georgia Tech to open his bicycle shop in Athens. He was also an electrical contractor, and his small shop on Washington Street doubled as a garage where he tinkered with motorcycles and early automobiles. Each morning he would roll out a barrel of gasoline in front of his shop to service the vehicles of his customers.

As early as 1905, Ben Epps was at work on a flying machine. In 1907, he was photographed outside his shop with the first plane he had completed. Mr. Marion N. Todd of Route 1, Winterville, Georgia, remembered seeing Mr. Epps fly his aircraft around 1908. Mr. T. W. Reed, an Athens editor and historian, wrote about Mr. Epps’ first flight in his flying machine in his column, “Echoes from Memoryland,” in the Athens Banner in 1946. Mr. Reed was an eye witness to the event. According to Mr. Reed, the first attempt to get the machine off the ground and into the air failed, but the second attempt was successful. The plane got up about 40 or 50 feet and maintained its flight about 100 yards. Then it came down and as it hit the ground it lost both wings, but fortunately pilot Epps was not even scratched.

Mr. Epps’ first flying machine bore some resemblance to the first Wright Flyer, primarily in that the horizontal stabilizer was in front, and it had a pusher-type propeller. However, it was a monoplane, while the Wrights flew first in a biplane. Mr. Epps had used his mother’s sewing machine to fashion the first fabric for the wings of his aircraft.

One month after Orville Wright made a spectacular flight of one hour, 20 minutes and 45 seconds at the record altitude of 260 to 280 feet, Mr. Epps launched his second airship in August, 1909. It reportedly got airborne briefly, but then was demolished in a crash. Again Mr. Epps walked away from the wreckage.

In 1909 to 1910, another plane was begun. It was powered by an engine mounted in front and had four landing wheels, a steering wheel, and one wing, but still it was reluctant to fly. It also ended as a mass of mangled fabric, wires, wood, and metal.

Undaunted, Mr. Epps built another plane which he completed in 1912. A picture of its demise in a 1912 crash shows features evolving in his planes which were employed in the successful 1925 Epps Light Monoplane, which he sold for $1,000 to C. Gleasman of Syracuse, New York, in July, 1926.

In 1919 he and L. M. (Monte) Rolfe established the Rolfe-Epps Flying Service in Athens to offer passenger flights, flying instruction and aerial photography. During these years Mr. Epps bought, repaired and sold other aircraft. He also designed and built a controllable pitch propeller. This developed into the Epps Light Monoplane. An Athens newspaper reported on May 31, 1925, that upon completion of it fourth flight, it was considered highly satisfactory. The plane weighed 340 pounds, had a two cylinder motorcycle engine, a speed of 60 mph and got 25 miles to a gallon of gasoline.

Mr. Epps began teaching his growing family of children to fly, and Ben, Jr., the oldest son, soloed at age 13 in 1929. He established a record which led to a White House reception for him by President Hoover in 1931. Eight of his nine children are or have been aviators. His six sons are all engaged in various phases of aviation. His youngest son, Ernest Patrick Epps, is president of Epps Air Service and Epps Aircraft, Inc. at the DeKalb-Peachtree Airport.

Ben Epps was critically injured in a crash at Athens in 1935 and in 1937, he was fatally injured in a take-off crash at the Athens airport, which is now named in his honor. His wife, Omie Williams Epps, was a staunch supporter of his interest and adventures in aviation. After his death, she encouraged their children to actively participate in their father’s chosen field.