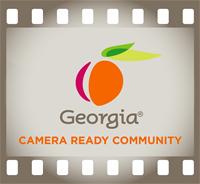 Athens-Clarke County is designated as a Camera Ready community by the Georgia Music, Film & Digital Entertainment Office, part of the Georgia Department of Economic Development.

The Athens-Clarke County Public Information Office (706-613-3795) serves as the official film liaison, but works with many partners, including the Athens Convention & Visitors Bureau, Film Athens, the Athens Downtown Development Authority and other entities.

Individuals or companies looking to film in Athens-Clarke County should first fill out an online Film Project Information Form. This will allow the Camera Ready liaison to assess requirements specific to your film.

Check back soon for a full, printed guide to filming, photography, and videography in Athens-Clarke County, produced by the Public Information Office in conjunction with Film Athens and other film partners.

Generally speaking, filming for commercial or non-commercial purposes in public spaces or private property does not require permitting unless:

Contact the Public Information Office for information related to filming with drones.

Filming on The University of Georgia Campus

Filming on The University of Georgia campus requires formal, written permission from the University. For more information, see their External Commercial & Documentary Filming/Photography on Campus policy.