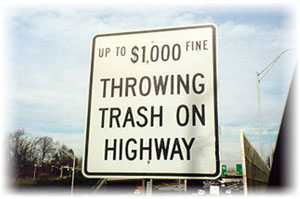 Put Simply, Littering is a crime.
In 2006 the Georgia General Assembly passed a new law known as the Comprehensive Litter Prevention and Abatement Act of 2006. The act improves the ability of law enforcement to punish litter offenders and clarifies complicated statutes related to litter.